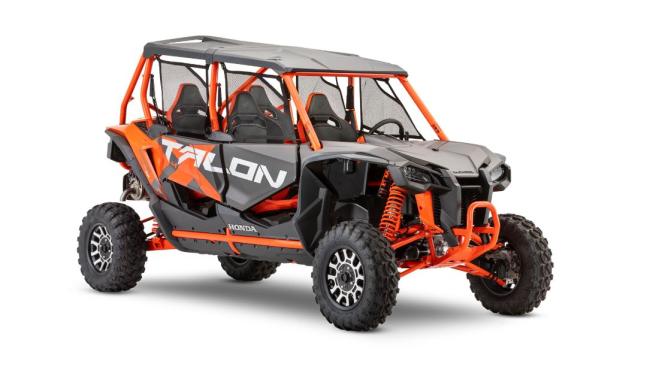 How can we help?

FOX LIVE VALVE SUSPENSION
The Talon 1000X-4 FOX Live Valve features FOX Live Valve suspension with 2.5-inch shocks on all four wheels. The system adjusts damping on each shock independently, automatically, and up to 16 times a second for superior ride quality and less pitch and roll over all terrain.

CHASSIS AND SUSPENSION
The Talons feature a special, long-wheelbase and high-performance chassis that forms the basis for its superior handling and stability. From there we add long-travel independent front and rear suspension and generous ground clearance. The Talon 1000X-4 FOX Live Valve showcases our new FOX Live Valve suspension with 2.5 shocks front and rear.

3-LINK REAR SUSPENSION
On the Talon, Honda’s 3-link trailing-arm rear suspension is one of the secrets to their superior handling. Featuring 15 inches of rear-wheel travel for a smooth ride and superior control.

AUTOMATIC SIX-SPEED DCT TRANSMISSION
The convenience of an automatic with the strength, control, and efficiency of a manual, Honda’s DCT lets you drive the way you want. Choose between manual mode or fully automatic. Plus, the addition of Sport Mode increases the fun, shifting at higher RPMs for a spirited, full-performance driving experience. DCT puts you in control as to what engine speed you want, and what gear ratio. Or you can let it do all the thinking for you. In addition, you also get genuine compression braking and a more efficient power delivery than a belt-driven CVT.

I-4WD
The Talons showcase the second generation of our exclusive I-4WD system, specifically tuned to respond quicker and capable of delivering even more drive force. Think “I” for “Intelligent,” because that’s exactly what it is. An industry-first brake-traction control system for side-by-sides, it simplifies operation, increases drivability and optimizes traction. Using proven, advanced technology from Honda’s automotive division, you get the benefits associated with a locked front differential with none of the downsides. That means it maintains front-wheel traction even if one wheel wants to spin on ice or mud or if it’s in a hole. But at the same time, you get the lighter steering, better tracking at high speeds, tighter turning radius, and reduced kickback associated with unlocked front differentials. Special software tunes the I-4WD system for sport use.

LAUNCH MODE
Nobody wants to get beat off the line, and with a Talon 1000X-4 FOX Live Valve you’ll be the one doing the laughing. It’s the only side-by-side with both an automatic transmission and a launch mode. And it’s easy to use: Just hold down the brake, press the Launch Mode switch, hold both paddle shifters back, floor the gas pedal, and release the paddles. Hold on tight, because you’re going to be feeling serious acceleration. The DCT automatically shifts up too, so you keep going through all the gears. Launch mode even features a special yaw control, so you launch straight and true.

STADIUM SEATING
The Talons feature stadium seating for the rear passengers: compared to the front seats their seats are set almost three inches higher and two inches closer to each other, which gives those passengers a much better field of view. They’re not just looking at a pair of helmets in front of them—they get to enjoy the ride like everyone else. Forget about first class and coach—everyone rides first class here.

PAINTED BODY
Why paint and not color-molded plastic? Because the Talon’s painted body parts resist scratching better, and we know that where you’re going to be driving this side-by-side, you won’t want to slow down for a little brush by the side of the trail. Plus, they just look better—the first time you see a new Talon in person, we’re sure you’ll agree.

POWERFUL 999cc TWIN-CYLINDER ENGINE
Sport side-by-sides need power, and you’re sure to find the new Talon 1000X-4’s offer plenty of it. The Talon’s 999cc liquid-cooled inline twin delivers the kind of powerful torque and quick-revving horsepower you’d expect from a flagship sport model, but is equally responsive in lower revs and in the critical midrange too. Set longitudinally in the chassis and managed by Honda’s sophisticated PGM-FI engine-mapping system, it delivers the kind of refinement no other side-by-side can match.

ROLLER ROCKER ARMS
Roller-tip rocker arms in the Talon’s valve train help reduce engine friction, facilitate higher, faster revs, and contribute to more efficient engine operation and power. They’re another example of Honda refinement you may not see, but that you’ll feel with every ride.